Last Wednesday and Thursday nights, St. Mary’s PS hosted our end of year school plays. Classes from 2nd to 6th had worked hard all year with drama teacher, Mary Nagle, to ensure each class production was the best it could be.MC, Noreen Barry explained how the performances were a culmination of a fantastic year for our children. Highlights included watching chicks hatch in an incubator, Zumba and Ukulele lessons, a cinema trip, pancake races, achieving our latest Green Flag and a visit from the Coastguard Helicopter, to name just a few.

Local actor, Moe Dunford, who had previously visited the school to launch the drama lessons, sent the children a warm message of encouragement for the night. He would have loved to have been present on the night, but due to work commitments was unable to attend.

The show was opened by a very entertaining version of Goldilocks and the Three Bears performed by 4th class which was followed by an excellent performance of  The Mice Wedding by 3rd class. 3rd class also performed Jack and the Beanstalk, getting plenty of laughs from the audience. 4th class told a story about a King looking for a suitable suitor for his daughter. The 5th and 6th class version of Cinderella resulted in the two ugly sisters getting what they deserved, amongst cheers from the audience. They also produced a thought provoking play about a King who sets his sons a test to see who will be most suited to ruling his Kingdom after he dies. 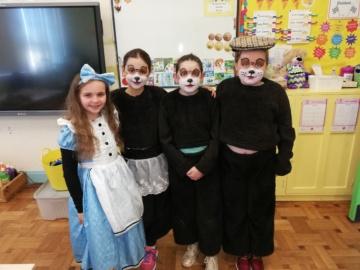 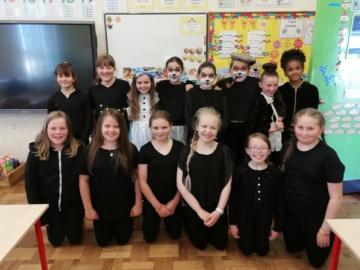 Little Red Riding Hood was performed by 5th class, while 3rd/4th class enjoyed their production of The Boy Who Cried Wolf. Ms. Quinn’s 6th class showcased some amazing talent with their version of Snow White and the Seven Dwarves, while 2nd class told us the story of The Emperor’s New Clothes. We were treated to another performance by 3rd/4th class, The Three Little Pigs, before the interval. 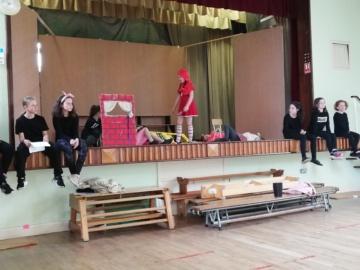 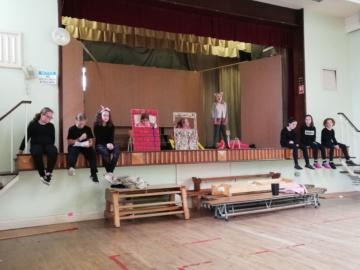 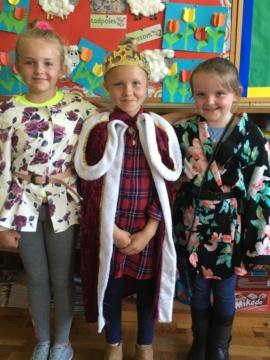 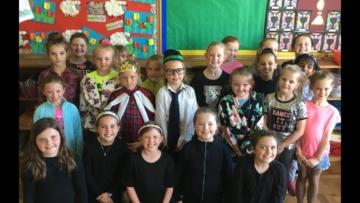 During the interval, members of the Parents Association held a raffle, with some of the younger members of the audience helping Mrs. Barry with selecting tickets.

Following the interval 5th and 6th classes performed a tale from Ancient Greece. They explored some of the most famous tales from that era. Ms. McGrath’s 3rd class showcased their musical talents with tin whistles, ukuleles and percussion instruments being played. 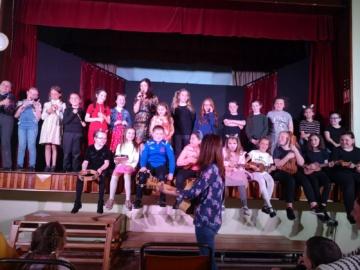 To end proceedings all classes formed a border around the hall to perform the Irish Macarena style song, An Dreoilín, much to the amusement of the audience.

The performances were a huge success and we wish to thank all who helped in any way. A special mention must be given to our caretaker, Jonathon, Ms. Quinn and Joanne for ticket design and sales, Seán for sound and lighting, the Parents Association and staff of St. Mary’s. We must of course say a special thank you to Mary Nagle, our drama teacher, who made all this possible. The children thoroughly enjoyed her classes throughout the year and loved being on stage. I have no doubt, after some of the performances, that we will see one or two on the ‘Big Stage’ in years to come!