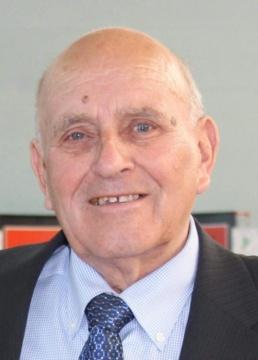 An air of sadness descended over our school last Thursday, as we learned of the passing of the Chairperson of our Board of Management and good friend, Paddy Fitzgerald. Paddy assumed his role as chairperson of our school twelve years ago and has been an advocate for St. Mary’s ever since.

Paddy worked alongside principal, Marcella McGovern, until her retirement and with Fiona Fitzgerald up until the time of his death. Both ladies will testify to the outstanding contribution Paddy has made to St. Mary’s PS. His advice and knowledge on all aspects of running a school, of which there are many, was invaluable. No job was too big or too small for Paddy.
Paddy was instrumental in many structural improvements that were made to the school in recent years. He was the driving force behind our wonderful ASD unit which has benefitted so many children over the last number of years. He secured additional funding from the local St. Stephen’s Day Run to ensure the ASD unit had all resources it needed to run efficiently. He worked very closely with our caretaker Jonathon to ensure that our children have a safe and inviting place to learn.
Paddy was interested and proud of all aspects of life in St. Mary’s. He was present at all our special occasions and imparted words of wisdom to those present at each. He met everyone with a smile and had a chat for everyone. Paddy went about his business with no desire for recognition and gave of his time freely to all those who needed it. The same can be said for all the other organisations he was involved with, Dungarvan GAA Club, the No Name Club, Scór, to name but a few. Paddy has certainly left a lasting legacy in our school and, indeed, the whole community.
To his beloved family, who were everything to him, we would like to offer our sincere condolences; to his wife, Mary, his sons, John and Kieran, his daughter Gráinne, his grandchildren and to all his family and friends. Ní bheidh a leithéid ann arís. Go raibh maith agat Paddy.